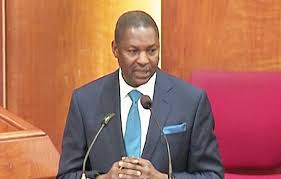 On Monday, Abubakar Malami(SAN), the Attorney-General of the Federation commissioned a 21-man committee on the disposal of Nigeria’s forfeited assets.

The rest are the representatives of the youth, the media, and any other Nigerian with exceptional expertise that could add value to the Committee as deemed fit by the AGF.

According to Abubakar, the committee is expected to sell off all assets forfeited in favor of the Federal Government within six months.

The committee which is chaired by Dayo Apata (SAN), the Solicitor-General of the Federation and Permanent Secretary, Federal Ministry of Justice, has been approved by President Muhammadu Buhari.

“In compliance with the directives of Mr President, the Office of the Attorney General of the Federation and Minister of Justice issued Asset Tracing, Recovery and Management Regulations, 2019 to provide legal and administrative frameworks for the investigation, tracing, seizure and disposal of stolen or illegally acquired assets and proceeds of crime.

ALSO READ:  3,506 NDLEA Officers Have Been Promoted After Years Of Stagnation

“The regulation was drawn from the extant laws of the relevant anti-corruption and law enforcement agencies.

“It is aimed at ensuring proper coordination of the disposal of the Federal Government assets and for promoting a uniform, harmonised and transparent procedure to safeguard the assets recovered by the relevant agencies in line with the anti-corruption drive of this administration,”

He added that the terms of reference of the committee would include, transparency of the disposal of Federal Government final forfeited assets and the synergy and collaboration between the AGF, law enforcement, anti-corruption agencies, other relevant Ministries, Departments and Agencies and the Non-Governmental Organisations in the collation of records of all assets.

He said: “Your mandate is to ensure the expedient disposal of all FGN Forfeited Assets and generate revenue for the Federal Government of Nigeria”, and warned that, “the task before the Inter-Ministerial Committee is an enormous one and must be conducted with utmost dignity having the interest of Nigeria at heart.”

Apata also speaking said it would help in ” advancing the rule of law and anti-corruption stance” of President Buhari’s regime.