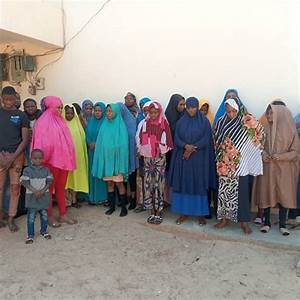 The Katsina State Police Command has rescued 29 victims of human trafficking including children.

Spokesperson of the command, SP Isah Gambo, who confirmed this in a statement on Wednesday, December 16, said the victims were intercepted at Unguwar Jummai village in Mai’addua Local Government Area of the state while on transit from the southern part of Nigeria to Libya, Algeria and Turkey.

“On 11/12/2020 at about 23:00hrs, the Command succeeded in rescuing twenty-nine (29) persons, comprising twenty three ( 22) females and five (5) male, and two (2) children, all victims of human trafficking on transit from the southern part of Nigeria to Libya, Algeria and Turkey respectively. Victims were intercepted at Unguwar Jummai village, Mai’addua LGA of Katsina state, a border town with Niger Republic.” the statement says.

Isah explained that investigations were ongoing with a view to arresting the traffickers. Below are the names of those rescued: