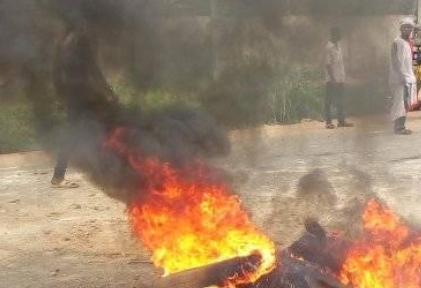 On Thursday, 22nd October, in Nnewi, a policeman was beheaded and burnt to death by hoodlums during #endsars protest.

“On the 22/10/2020 between 3:30am and 5:pm,the hoodlums in large number equally attacked Nnewi Area Command,3-3 Division,Ogbunike/ Isiuwulu, Ozubulu ,Nnobi,and Itchy Divisions as well as peoples club police post, burnt Police vehicles and set the facilities ablaze carting away exhibits kept at the Divisions,”

“One police officer was beheaded and burnt to ashes while three others sustained various degrees of injuries.The injured police officers were rushed to the hospital for medical attention and they are responding to treatment,”

“On the 21/10/2020 at about 11:30pm hoodlums in large number under the guise of “END SARS”protesters attacked Nnewi Police Station,set it ablaze and vandalized patrol vehicles and other exhibits but were prevented from assessing the armoury to cart away arm due to strong resistance placed by police men on duty.”