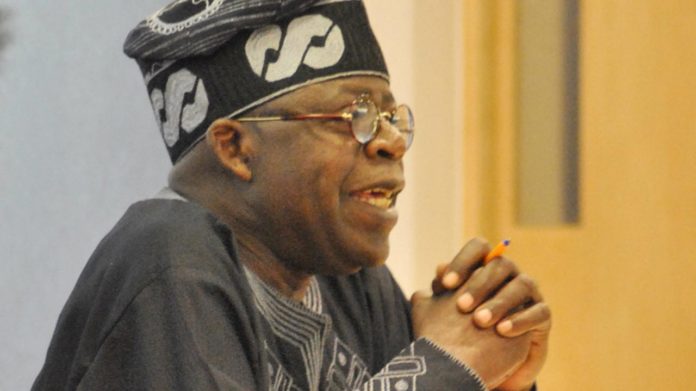 The All Progressives Congress (APC) National Leader, Bola Tinubu has commiserated with people of Lagos over the death of retired justice oluwa
According to him, Oluwa remained a shining example for the legal profession,
“retired justice oluwa was Pro-Chancellor of Lagos State University and Chairman of the Governing Board, he worked assiduously for the advancement of education. He eschewed the practices that would have tempted a weaker and less honourable man,” he wrote.

Tinubu noted that Oluwa’s dignity for equality and incorruptibility was why he presided over the high-profile and difficult cases in lagos and in Nigeria at large.

He added, “Many of his landmark judgments became judicial precedents that have shaped many other judgments. As all good judges, he based his decisions entirely on the available evidence and full application of the law.”
The APC leader recalled that the deceased’s excellent judicial qualities were displayed in the cases between the State and Lagos socialite, Jimoh Ishola alias Ejigbadero, in the murder of a farmer, Raji Oba, at Alimosho in 1975.
He stressed that Oluwa refused to pervert justice and always followed the law without fear or favor.
Tinubu said his achievements on the bench and in retirement stood as a testament to the protection of the masses and the advancement of Nigeria.
The former Lagos governor added that the late legal luminary was a good counsel for generations of legal scholars and political leaders including himself.