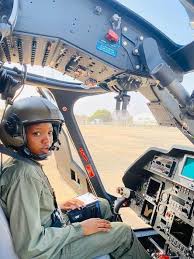 Arotile prior to her death was the first and only femal combat pilot. She was killed by an old school classmate who knocked her down while reversing to greet her at the Nigerian Air force Base kaduna.

The ambulance conveying the remains of the deceased first female combat pilot arrived at the military cemetery at about 8.38am.

see a few pics below: