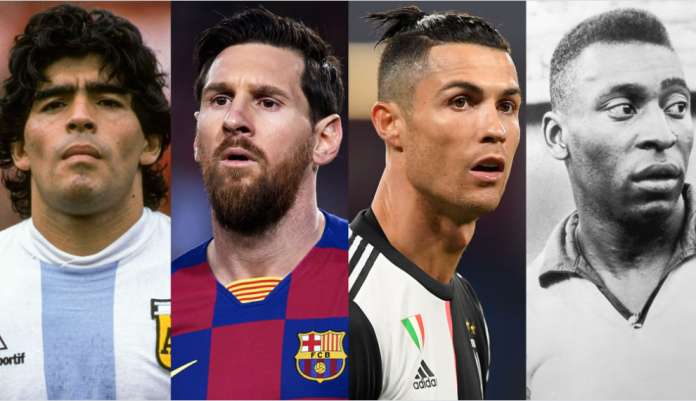 Recall this year’s Ballon d’Or award was cancelled due to the coronavirus pandemic, but France Football the weekly magazine that created the award, decided to instead announce a best XI in its place.

Journalists from 170 countries cast their votes on who would make the team, which sees the team line up in a 3-4-3 formation with goalkeeper and defenders being revealed first and then midfielder and attackers followed.

In goal, Russia’s legendary goalkeeper Lev Yashin was named as the greatest No 1 of all time.

Yashin, who won the Ballon d’Or in 1963 and remains as the only goalkeeper in history to win it, made 74 appearances for the Soviet Union between 1954 and 1970.

In front of him, are a back-three of Franz Beckenbauer, Cafu, and Paolo Maldini to make up the rock-solid defense.

Beckenbauer is the only defender to win the Ballon d’Or on two separate occasions, having won everything for club and country with Bayern Munich and Germany.

In front of them, Xavi, Lothar Matthaus, Pele, and the late great Diego Maradona made up the four-man midfield.

Xavi, one of the best midfielders to ever grace the game during his time at Barcelona, won the World Cup and two European Championships with Spain.

Alongside him is Matthaus, who won the Ballon d’Or in 1990. He also won everything for Bayern Munich and Germany.

Messi, who has won the most Ballon d’Or awards in history with six, is followed closely behind by his arch rival Cristiano, who has five to his name.

On being included in the team, Messi said on his Instagram page: ‘For me it is an honour to have been included in the eleven of the Ballon d’Or Dream Team. I want to thank you for choosing me and also congratulate all the players who were selected in the two teams and all the nominees, there are real phenomena on that list !!’

Ronaldo said: ‘I’m very honoured to be part of France Football’s All Time 11. What an amazing Dream Team… They all deserve my respect and admiration and I’m obviously proud to be amongst such extraordinary players. Thank you!’

The Brazilian Ronaldo takes up the striker spot in the team. The 44-year-old, who retired in 2011, won the Ballon d’Or in 1997 after a stunning season at the Catalan club before collecting the trophy again in 2002 after guiding Brazil to World Cup glory.