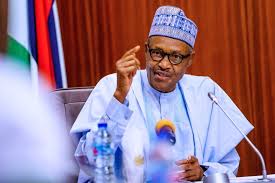 The meeting was held ahead of the governorship elections in Edo and Ondo states on September 19, 2020 and October 10, 2020 respectively.

On Tuesday, during a virtual interaction with the APC controlled states attended by Yemi Osinbajo, Mr. President commended the efforts of the Governors in a statement issued by his Senior Special Assistant on Media and Publicity, Garba Shehu:

“I am happy that they knew their responsibilities as governors and had identified the right priorities,”

“I am pleased with the chairman and the work of the committee. He is highly mobile in the efforts to coordinate and strengthen the party. I am happy with his personal efforts,”

Senator Atiku Bagudu, Governor of Kebbi State and Chairman of the Progressives Governors Forum (PGF) who spoke on behalf of his colleagues thanked Mr. president for his handling of security issues and the economy, noted in particular, the success recorded in pulling the country out of the 2016 economic recession as well as the ongoing management of the COVID-19 pandemic.

“We are proud of your leadership and achievements,”