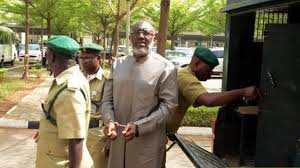 Recall the seven years jail term handed over to Olisa Metuh, former spokesperson of the People’s Democratic Party after he was found guilty of money laundering charges, it has been set aside by the Court of Appeal.

Proceedings of the Federal High Court leading to the conviction of Metuh and his company, Destra Investment Limited, was set aside by a three-man panel led by Justice Stephen Adah on grounds of being tainted with bias.

Delivering the lead judgement, Justice Adah who ordered a fresh trial held that the utterances of the trial judge, Justice Okon Abang in the course of the trial established that he was biased against the convicts.

The case file is now to be sent back to the Chief Judge of the Federal High Court for reassignment to another judge other than Justice Abang.