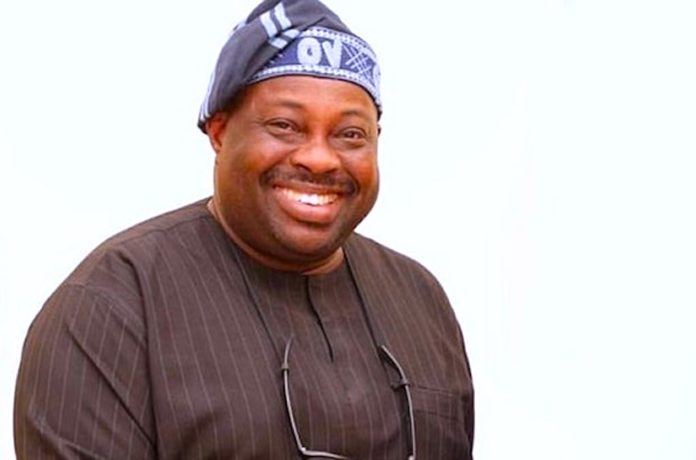 Detest him with every fibre in your vein, treasure him with every air you breathe, or be apathetic to his style, philosophy, and essence, Ayobamidele Abayomi Ojutelegan Ajani Momodu is a man you could say has fulfilled his destiny at 60.

Dele Momodu is a member of the exclusive club of personalities who have unlocked the formula of how to effectively blend intellectualism with extroverts and prime socialization. He is an accomplished man of letters, a media tycoon who redefined celebrity journalism in Africa and gifted the world Ovation Magazine, an inimitable celebration of momentous events in the lives of societal leaders since 1996. He is also a bold circumstantial politician who braved all odds to contest as a candidate, not an aspirant, for the highest office in Nigeria.

Start any conversation on any topic in any sphere, Dele Momodu will engage you with intellectual fluidity and sagacity. Drop the scope of the conversation to Owambe, a local lingo to describe feisty celebrations, Ajani will inject perspectives that will shock even Owambe’s most enthusiastic adherents. Take the tone of the conversation to the culinary realm, Ayobamidele will sooner let you know that he is just not a connoisseur of good food but a great cook who can, if the occasion arises, challenge chefs in michelin star restaurants to a cooking duel. He is as versatile in arts as he is in economics and politics.

Dele Momodu was moulded into this all-rounder by years of diligence, perseverance and exactitude. When he needs to fight, he fights like a wounded lion. When he needs to reconcile and move on, he does so without holding tenaciously to the grudges of the past. Whenever he falls, he picks up the pieces and learns his lessons. He definitely has his shortcomings but in his steely resolve, he has not allowed his foibles to drown his vision. Fate has also fortuitously played a great part in his journey.

He was groomed and grilled by the furnace called the Street of Life. As the son of a peasant, whose father, who he, unfortunately, lost when he was barely 13, worked at the palace of the Ooni of Ife as domestic help, rather than wallowing in self-pity, Dele challenged himself that he must grow up to lead the life of luxury that his father’s employers and their families led. Not one to allow the harsh circumstances of his formative years to scorch his dreams to extinction, Abayomi worked assiduously as he progressed in life, working different jobs and different shifts. He was a private secretary to Chief Akin Omoboriowo and a hotel manager for Ooni Okunade Sijuade. He has also been a teacher, a writer, a journalist, an editor of May Ellen Ezekiel’s Classique Magazine, and in Prince Nduka Obaigbena’s Leaders and Company, the forebarer of ThisDay newspapers, a PR practitioner and finally a publisher and businessman. Today, he is living that dream, even better than some of the children of that era’s nouveau rich.

ALSO READ:  'He is not a supportive father and I don't need his help'-- Diamond Platnumz Ex-Fiancee Says

Just as the aphorism goes that you are what you read, see, hear, write and speak, Dele Momodu became what he is today largely by what he read, heard, and also experienced during his trajectory; a mix and match of deprivation, comfort, and opulence. He is a voracious reader, remarkable wordsmith, and spellbinding writer, whose background as a graduate of Yoruba served in good stead.

Ojutelegan is a man of vibrant tranquillity. He may be loud but by his own admission, it is for a purpose. In his world and line of business, Dele Momodu felt that if he were not loud, it could mortally hurt his business. He is not willing to leave anything to chance in a society where many societal bigwigs of yesterday were forgotten within the twinkle of an eye, mainly because they could not sustain their tempo or adapt swiftly to changing trends.

One of the earliest adopters of digital media, Dele Momodu has invested millions of seconds, thousands of hours and days to grow and wield a muscular influence in the digital space. It was a wise investment, which has now become his largest medium of expression. Even his weekly column, “Pendulum”, through which he advocates his thoughts, is now read more online. You only need to spend an hour with him to realise how he is always on the ball, monitoring and tackling issues as they arise on the social media. An ardent believer in the philosophy of “ise lo’gun ise” (hard work is the panacea for poverty), not even his most vitriolic critic will utter a word to challenge his industriousness. Above all, Dele Momodu is a humanist, philanthropist and entrenched loyalist.

Chief Moshood Abiola died in 1998, about 22 years ago. Momodu could not be said to be MKO’s closest aide by the time he (MKO) paid the supreme sacrifice for the democracy we all now enjoy. Yet, nobody has consistently celebrated MKO more than he has, even when his late benefactor has no way to know or acknowledge what his protege has been doing for him. Momodu could also have moved on or simply kept quiet but at every opportunity, he reminds all about the humongous contributions of Abiola, one of the most generous philanthropists Nigeria has ever been blessed with, to humanity.

I met this media trail blazer we all fondly call Bob Dee in the early 90s. We instantly took to each other. He was based in Lagos, while my friend and brother, Professor Wale Adebanwi of Oxford University and I were based in Ibadan, plotting our steps up the ladder of life with my other brothers and bright minds like Professor Adeolu Akande, the current chairman of Nigeria Communication Commission (NCC) and Dr. (Pastor) Olusegun Olatunji, a former managing director of Nigerian Tribune. In spite of the space and distance, Bob Dee would always welcome every opportunity for us to be together, either in Lagos or Ibadan. He shared generously of his time and scant resources, not only with us but with numerous others around him, a tradition he maintains till this day. Whoever goes to Dele Momodu seeking his intervention to speak with any of his influential friends to resolve a pending issue is assured of his listening ears and affirmative action. Dele Momodu is far from perfect but he strives to be better.
Perhaps the greatest take away from the Dele Momodu success story is the compelling message for the millions of Nigerian youth living in extreme poverty today. The humbling experience you are passing through is not a life sentence to poverty, despair and perdition. Just like Bob Dee overcame the challenges of an early life of deprivation, you can also make it if you persevere and work hard. An even deeper message in the Dele Momodu narrative was how he almost succumbed to the pressure of life and contemplated taking his own life. During his days in exile in London, gradually, life crept to a screeching halt for him. The pedal of his finances decelerated to zero. He could not cater for himself and his family. He felt all hope was lost and decided to end it all. He was heading to where he would commit suicide when Chief Alex Duduyemi, who was also in England, got to know of his plan, called him on the phone and asked him to come straight to his office. That was how the suicide mission was averted. Bob Dee’s turn around story is a reinforcement of the famous expression that when there is life, there is hope.

In his distinctive nature as a very appreciative person, Bob Dee would tell anyone around him that I was his Angel Gabriel because I was often the person Dr. Mike Adenuga, the Globacom chairman, sent to him at unique intervals. Acclaimed for his mind-blowing generousity, particularly to people he is fond of, as he is of Dele Momodu, Dr. Adenuga would at almost biannual intervals ask, “Bode, what do you think I can do for Dele for his kindness towards me?” As Bob Dee would often admit, those interventions by Dr. Adenuga always came in handy.

Dele Momodu is not only my friend but my big brother and confidant. He would always celebrate my professional competence beyond what modesty definitely would have allowed me to personally admit. He told Chief Leno Adesanya when he (Adesanya) wanted to openly make the case for the unjust manner the federal government shoved him aside from the Mambilla Power project, that if he needed the best person to handle the PR campaign for him, he should contact me. I was humbled when Chief Leno Adesanya mentioned that to me because Bob Dee did not even disclose that.
As our own Bob Dee breasts the Diamond tape on May 16, I can only wish him the very best life can offer as I congratulate him, his amazing wife, Madam Mobolaji and their beautiful children for reaching this milestone. Bob Dee, diamonds are forever! You will forever be a golden landmark in the lives of the thousands of people you have impacted. The time-tested Yoruba adage says a child who knows how to wash his hands clean will dine with elders. You have washed your hands clean, you have dined with elders, royalties and presidents, locally and internationally.

Now, you have become an elder in the land, it’s time for you to step up your role of identifying those younger ones in the society who are washing their hands clean metaphorically so that you can recommend more of them to elders of our land, kings, and presidents for special recognition as an incentive for greater performances. Happy 60th birthday, our own dear Bob Dee.