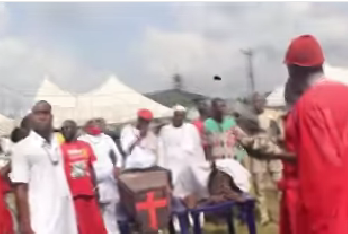 The traditional ruler of Idjerhe Kingdom in Ethiope West Local Government of Delta State, His Royal Majesty, Monday Obukowho Whiskey, and the people have laid curses on criminals especially cultists.

As a result of the rising cases of cult-related killings alongside cases of internet fraud, kidnappings among other crimes in the community, a traditional cleansing ceremony was performed on Friday, December 18.

Native doctors from 42 communities of Idjerhe Kingdom gathered in Jesse, the traditional headquarters of Idjerhe on Friday, where they offered traditional prayers using duck, a puppy, and a cock while they pour libation against the development.

During the ceremony, the traditional ruler and members of the community lamented the growing cases of death as a result of cultism and internet fraud, asking the gods of the land to visit perpetrators of heinous crimes in the kingdom with calamity.

ALSO READ:  Lagos State Announces Plans To Support Owners Of Businesses That Were Vandalised And Looted By Hoodlums