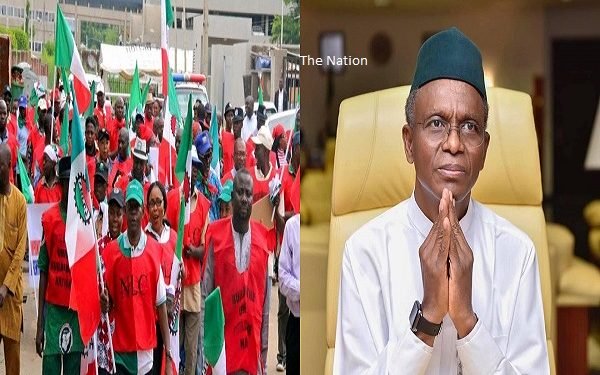 The Nigeria Labour Congress (NLC) in Kaduna State has rejected deduction of 25 per cent from salaries of senior civil servants in the, asking Governor Nasir El-Rufai to return the deducted fund or face action from the Union.

Kaduna State Government had at the weekend announced it would deduct 25 per cent from salaries of civil servants receiving above N67,000 to provide palliatives for vulnerable residents who don’t work for the government and are affected by the COVID-19 lockdown.

But addressing a pres conference in Kaduna on Wednesday, NLC Chairman, Comrade Ayuba Suleiman, said, government should stop the 25% deduction and refund the affected workers.

Suleiman argued the deduction ought to have been done with the consent of the labour union and function as voluntary donation rather than forceful deduction.

According to him: “Sequel to the deductions of 25% on the salary of all civil servants in Kaduna state, effective from April, 2020, labour in Kaduna State unequivocally rejects this deduction. This is because the Union was not consulted on the issue nor consented to the deduction.

“Article 8 of the International Labour Organization Protection of Wages Convention, 1949, (No.95) provides that deduction from wages shall be permitted only under conditions and to the extent prescribed by the National Laws or regulations or fixed by collective agreement or arbitration award.

“Section 5(1) of the Labour Act Cap 1.1 laws of the Federation of Nigeria 2004 provides thus: “Except where it is expressly permitted by this act or any agreement or contract with a worker for any deductions or wages to be paid by the employer to the worker or any payment to the employer by the worker for or in respect of any fines provided that with the prior consent in writing of an authorized Labour officer a reasonable deduction may be made in respect of injury or loss caused to the employer by the willful misconduct or neglect of the worker.”

ALSO READ:  An 80-year-old man collapsed and died suddenly while he was in a hotel room with his girlfriend

“Labour in Kaduna State is not against the provision of palliatives to the poor to cushion the COVID19 lockdown from the salaries of civil servants in Kaduna State but wish to state that, it ought to be carried along, and such deductions or contributions should be made voluntary not compulsory.

“As responsible working groups who are conscious of the predicament of the average citizens of Kaduna state, we are disposed to committing much higher for the wellbeing of the less privilege if the need be and proper process is followed.

“In view of the above, Labour in Kaduna state calls on the Kaduna state government to stop the 25% deduction henceforth and should return the 25% salary already deducted from the workers.

“Failure to comply with the above will leave the labour in the state with no option than to explore other possible avenues within the purview of the law.”