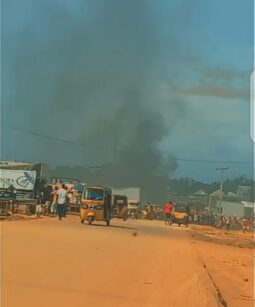 On Thursday, hoodlums stormed 3-3 Police Station in Onitsha, Anambra State, and freed some detainees before setting the station on fire.

According to a resident of the area identified as Frank Emenike, he said;

“Some protesters arrived at about 10 am on Thursday, shot sporadically in the air before setting the station on fire, after freeing those detained in the police cell.

“Yes, the 3-3 station is now on fire. I am already at the scene. About ten persons died during the midnight protest around the Old Market Road in Onitsha.

“At about 10am today, they shifted to 3-3 area and got the police station burnt,”

There was no official report from the state Police command over the development as Police spokesperson, Haruna Mohammed could not pick his calls, neither did he respond to text messages sent to his cell phone.