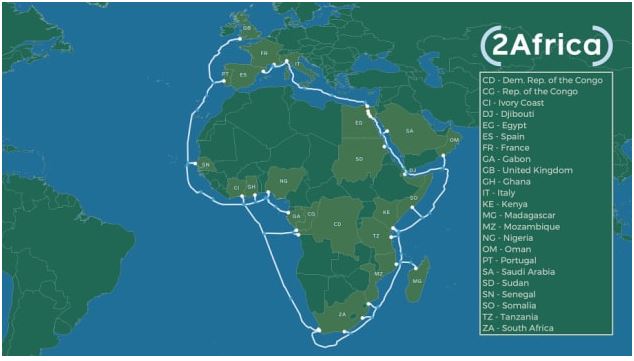 Facebook is building a massive undersea cable around Africa in an effort to bring more of the continent’s 1.3 billion inhabitants online, the CNBC reported on Thursday.

The social media company has partnered with the likes of China Mobile, South Africa’s MTN, France’s Orange and Britain’s Vodafone as well as local network operators on the project, dubbed 2Africa.

It’s tasked Nokia-owned cable systems provider Alcatel Submarine Networks with building the subsea cable. At 37,000 kilometres — or about 22,991 miles — in length, Facebook claims the cable will be “nearly equal to the circumference of the Earth.” It’s not yet clear how much funding Facebook and its partners have put behind the project.

A primary goal of the initiative, Facebook says, is to bring increased connectivity to Africa. The continent is “currently the least connected” in the world, the company wrote in a blog post Wednesday, with just over a quarter of its population having internet access.

The subsea cable will interconnect 23 countries in Africa, the Middle East and Europe. Facebook states it will “provide nearly three times the total network capacity of all the subsea cables serving Africa today.”

Facebook said the 2Africa project was made more efficient by the use of aluminum rather than copper fibers, as these could help increase network capacity. The company is now in the process of developing a new crossing linking the Red Sea with the Mediterranean, which it claims will be the first in that region in more than a decade.

“2Africa is a continuation of our ongoing efforts to expand global network infrastructure,” Facebook said. “We have collaborated with partners all over the world to build several subsea fiber-optic cables that are leading the industry in terms of reach, capacity, and flexibility.”

ALSO READ:  Man who battered his wife and then went on Facebook to brag about it and shared photos of her bleeding face, has been arrested

Still, the coronavirus pandemic could pose a number of challenges. The World Health Organization has warned Africa could be heavily impacted, recently claiming it could kill up to 190,000 people in the region in a year if not contained.

Nevertheless, the move from Facebook highlights increased interest from Silicon Valley companies in Africa as a high-growth investment opportunity. Twitter CEO Jack Dorsey last year said he planned on moving to the region — though he recently had to “reevaluate” that ambition due to the coronavirus outbreak.

Google is also working on an underwater cable, called Equiano, which would connect Africa with Europe. The web search titan has another unit named Loon which makes high-altitude balloons to deliver 4G internet to rural communities. It recently announced an expansion of that scheme to Mozambique.

Facebook previously had plans to beam the internet to remote areas using solar-powered drones. Called Aquila, the company shuttered the project back in 2018 but has reportedly been working with Airbus to test such drones again in Australia.