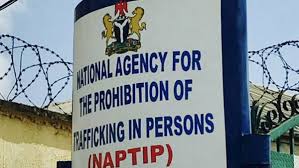 Paulina Okere, an indigene of Adavi in Kogi State has been arrested by NAPTIP (National Agency for Prohibition of Trafficking in Persons) for trafficking 74 children under the guise of running an orphanage.

According to the Agency, Paulina either abducted the children or took them from their parents under the guise of taking care of them only for her to be giving them out to people.

Dame Okah- Donli, Director General of NAPTIP made this known in Abuja where she said Paulina claimed that some of the children are orphans while some parents debunked the claim.

“On the 6th of July, the suspect was arrested by operatives of the Department of State Services (DSS), following a petition received from members of some communities in Kuje Area Council of the FCT.

“The suspect allegedly collected 74 children while claiming to foster them at her orphanage home known as Divine Hands of Hope located at Chukuku, in Kuje.

“She claimed that the children are orphans, but some of the parents have debunked the claim. The suspect carries out her activities with the collaboration of some workers of the orphanage who are now on the run.

“In the same vein, members of the community are still coming forward with names of some children said to have gone missing within the same neighborhood.”

However, Paulina explained her own part of the story saying:

” have good intentions. These children were brought to me in the disguise that there was a Fulani herdsmen attack in their village and some of them had lost their parents, and I have been accommodating them.

“I fell sick, and when I was about to be admitted, I called the man that handed the children to me with their community leaders and asked them how to go about it, and they suggested that I raise foster parents for the children.

“I drafted an agreement and filled a form which they signed. Some agreed that the children should be returned after primary or secondary school.

“By December last year, while I was critically ill, they called me and asked that I should return the children, and I told them that I was down.

“I have a Corporate Affairs Commission (CAC) form and undergoing my registration with Social Development, and I have an Area Council certificate for my orphanage. I only sent them to foster parents that would take care of them.”