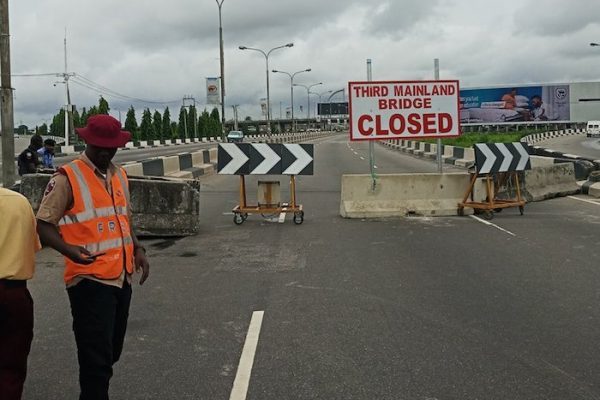 On Thursday, the Federal Government announced that the 1st phase of the rehabilitation of the Third mainland bridge is completed.

Mr Olukayode Popoola, the Federal Controller of Works in Lagos during an inspection said that the fixing of six expansion joints on the Oworonshoki bound carriageway had been completed.

Speaking further, he said that debris would be cleared from the section and construction would move to the Island-bound carriageway, warranting a total closure of the bridge for 18 hours.

The 18 hours closure would begin from midnight on Saturday through Sunday to move construction materials to the new portion and return to the partial closure before Monday morning.

“The diversions will still be at the same previous points.

” Work is to commence on the Island-bound lane of the bridge with the partial closure of Adekunle to Adeniji Adele Phase B.

“Consequently, Adekunle to Adeniji-Adele part of the bridge on the Island-bound lane measuring 3.5 Kilometres will be partially closed throughout the period of repair works and there will be a diversion of traffic,”

“On behalf of the Honorable Minister of Works and Housing, Mr Babatunde Raji Fashola (SAN), I thank Lagosians and the motoring public for their cooperation during the last four months that the rehabilitation work has started.”