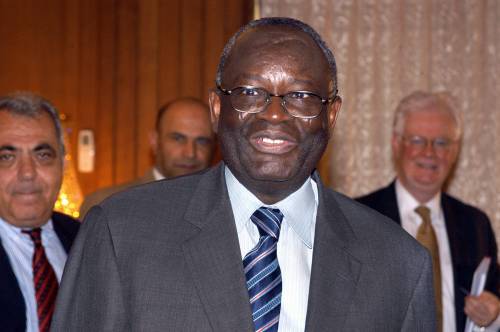 Though he was officially announced as the new Chief of Staff to President Muhammadu Buhari on Wednesday, news of his filling the role left behind by late Abba Kyari had been everywhere since Tuesday.

Despite an attempt to sell him as a widely experienced diplomat, Gambari has lent his career to assisting Nigerian dictators to oppress citizens through undemocratic acts, judicial murders and large scale corruption.

A few of publicly documented actions directed against democratic progress and abuse of human rights in Nigeria are noteworthy.

In 1995 for instance, he openly backed the killing of Ogoni environmentalist, Ken Saro-Wiwa, and eight other activists during the ruthless General Sani Abacha military regime.

Gambari had informed the United Nations that the killing of Saro-Wiwa was legal as it was done in line with the law and constitution of Nigeria.

The UN General Assembly had condemned the arbitrary execution of Saro-Wiwa after a flawed judicial process, emphasising that everyone charged with a penal offence had the right to be presumed innocent until proven guilty according to the law in a public trial with all guarantees necessary for defence.

But Gambari accused the UN General Assembly of dancing to the tune of some individuals trying to challenge the sovereignty of Nigeria.
He said that by the draft resolution, the sovereign right of a member state to enact a law was being challenged and the right to use capital punishment for serious offences was being questioned.

The Ilorin, Kwara State-born professor was once quoted as saying, “Nigerians don’t need democracy because democracy is not food. It is not their priority now.”

As more pressure mounted on the Abacha regime from all corners of the world, Gambari became more notorious and ruthless in defending and deflecting attacks against the Abacha dictatorship.

As a result of his actions, he was forced to resign as head of a committee organising peace talks between the Nigerian Government and militants in the oil-producing Niger Delta.

Some Niger Delta leaders including MEND rejected Gambari’s involvement in the proposed summit.

“My appointment has attracted what appears to be a well orchestrated and relentless opposition from some quarters, institutions, groups and individuals.

“As a result, my name has become the issue in place of the attempt at finding a just and lasting solution to the crisis in the Niger Delta.

“In light of this, I wish to be excused as the chairman of the steering committee of the summit,” Gambari said in his resignation letter to former President, Umaru Yar’Adua.

Apart from his role in the killing of Saro-Wiwa and the eight Ogoni indigenes, President Buhari’s new Chief of Staff is also known to have openly supported the annulment of June 12, 1993 election won by business tycoon, Moshood Kashimawo Olawale Abiola.

The military regime of Ibrahim Badamasi Babangida cancelled the outcome of that election overwhelming won by Abiola while the Abacha government arrested and threw him in jail where he remained until he died on July 7, 1998.