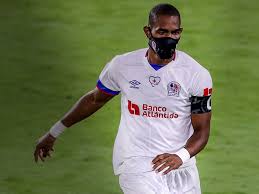 Jerry Ricardo Bengtson Bodden, 33 is a Honduran footballer who plays as a forward for Club Deportivo Olimpia.

He is believed to be the first footballer to wear a face mask during and throughout a game amid the COVID-19 pandemic.

The Honduras international donned the face covering to protect himself and his team members as his side took on Montreal Impact in the CONCACAF Champions League on Tuesday, December 15.

Olimpia actually fell to a 1-0 defeat to Thierry Henry’s team, who went through to the semi-final with a 2-2 win on aggregate.

ALSO READ:  COVID-19: ''A Total Of 476 Health Workers Have Contracted The Virus In FCT''- Mohammed Bello