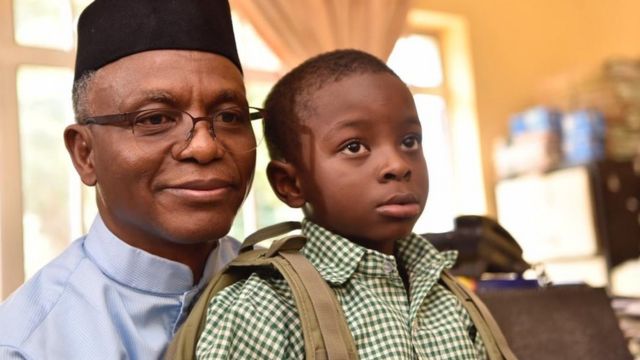 Nasir el-Rufai, Governor of Kaduna State speaking during an interview with BBC Pidgin explained why he had to withdraw his children from public schools.

According to him, bandits were targeting them for abduction.

“My son and my daughter are registered in the school because his sister became six and we had to register her.

But we have had to temporarily withdraw them for the security of the school because we got intercepts from at least two groups that are planning to attack the school to kidnap my son.

I don’t think they will succeed because there will be enough security there to prevent it but other children may be placed in danger.

We have no idea what weapons they will come with. I have taken a stand against paying bandits and at least three groups of bandits have been intercepted planning to go to Kaduna Capital school and kidnap my son and ‘see if they catch my son, I go say I no go pay ransom?”

His son is currently being homeschooled.

ALSO READ:  UPDATE: Seven Alleged Suspects Have Been Arrested In Connection To The Invasion Of Teslim Folarin's Home In Ibadan