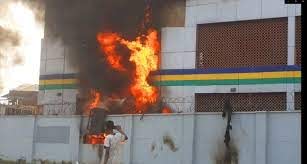 The Lagos state Police Command has stated that it will require N10b to replace facilities lost to the destruction by hoodlums.

According to the police command, the money mentioned would be required to replace the destruction of 25 police stations, 20 patrol vehicles, three barracks and communication gadgets.

Other losses incurred by the police were burnt case files, computer sets, personal and vehicle exhibits, personal cars and uniforms of policemen and most importantly, weapons looted from the armoury.

The command has, however, recovered 18 rifles carted away by hoodlums while more are still missing.

According to a police officer :

“In the standard investigative room, the funding must cover the cost for work stations for the Investigative Police Officers (IPO), a CCTV to monitor and record interrogations (this prevents the IPO from using force to extract confessions), tracking machines, integrated fingerprint database (for criminal profiling and fingerprint data), profiling filed and stationery.

“The communication/control room is another cost-intensive part of equipping the modern police station. The cost was pegged at N10 million per station.
“Between the personal walkie-talkie and the radio set in the cars that cost N75, 000 and N250,000 per unit, respectively, other equipment needed to fit the control room are the computer sets, internet facilities and stationery, among others.

ALSO READ:  BBNaija' Vee marks her territory after a fan indicated an interest in her man Neo - as she replied: "There is a queue and I heard it's VEE-I-P access only. "

“With 25 police stations burnt across the state and rebuilding to UN standard pegged at N300 million each, this means a total of N7.5 billion would be expended.”

“To be honest, you need to feel the pulse of the police, especially the lower cadre, they are bitter and feel humiliated that they ran in the face of danger on the orders of their superiors.

“Although we have started recovering some of our arms, the problem is that we can’t account for what was stolen. We are still taking inventory to know what was taken from each division.”