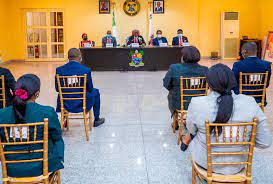 Lagos State Government set up a panel to investigate the shooting of unarmed protesters at the Lekki toll plaza on October 20, 2020, and is expected to begin sitting today.

Babajide Sanwo-Olu swore in Members of the panel to an oath of secrecy which read in part:

However, Nigerians have taken to twitter to react to the oath of secrecy saying:

“There is absolutely no need for folks joining the panel in Lagos State to swear an oath of secrecy. It just makes everything look suspect from the get-go. Trust level is currently at the lowest level. Lagos State Government should do everything to build trust,”

“Again, this oath of secrecy is legally defective. First, the idea of secrecy is occult. Section 38(4) of the 1999 Constitution frowns at ‘secret societies’.

“Oath of confidentiality would be better. Second, oaths are to be sworn before a commissioner of oaths, not the governor,”

“These panels are a public inquiry into a matter of public interest about public crimes and atrocities committed by the police. Televise all panel sessions,”