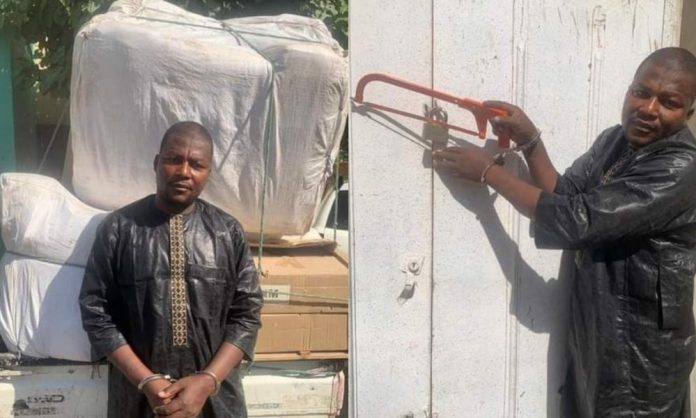 A man identified as Salmanu Mohammed Bashir, 36, has been arrested by the Kano State Police for breaking into a warehouse located at Tal’udu Quarters and stole goods worth N8m.

Confirming the incident, DSP Abdullahi Haruna, Spokesperson of the command said the suspect has confessed to the crime.

In a statement released, it read;

“On the 27/11/2020 at about 1020hrs, a report was lodged that a Hijet Pick-up Motor Vehicle with Reg. No. KMC 24 XY, white colour, loaded with Building Materials and Furniture was seen with suspected stolen properties,”

“Upon receiving the report, the Commissioner of Police Kano State Command, CP Habu A. Sani, immediately raised and instructed a team of operatives, led by O/C Anti-Daba *SP Bashir Musa Gwadabe to swing into action,

“The team intercepted the vehicle and arrested one Salmanu Mohammed Bashir ‘m’ 36 years old, of Gwammaja Quarters Kano. The suspect confessed breaking a warehouse located at Tal’udu Quarters Kano. He opened up on how he damaged the padlock and replaced it with a new one of the same colour and size and stole properties worth eight Million Naira (N8,000,000:00). Owner of the warehouse was identified. Investigation is in progress.”