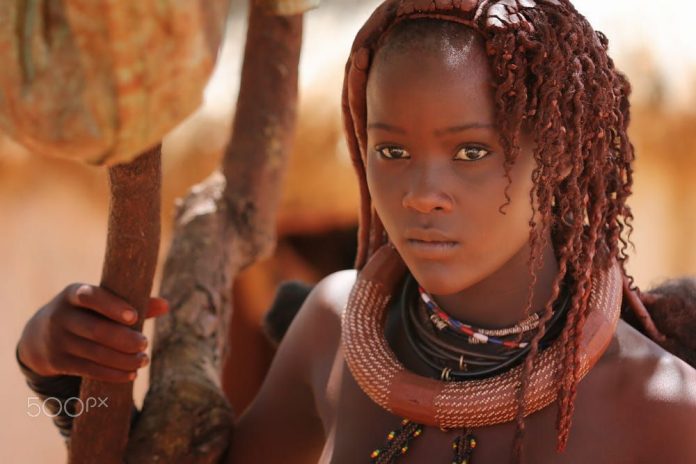 The Himba people are indigenous peoples living in northern Namibia, in the Kunene Region (formerly Kaokoland) and on the other side of the Kunene River in southern Angola. These people don’t bath.

These set of people are a unique set of humans whose culture has a twist that most of people will frown upon.

The responsibility for milking the cows and goats also lies with the women and girls. Women and girls take care of the children, and one woman or girl will take care of another woman’s children. The men’s main tasks are tending to the livestock farming, herding where the men will often be away from the family home for extended periods, animal slaughtering, construction, and holding council with village tribal chiefs.

The Himba’s with a population of over 50,000 people are  polygamous people where Himba girls are married off to male partners selected by their fathers once they attain puberty.

However, these same people have a ”bathing is forbidden” rule, which is rather than take their baths, the women take a smoke bath and apply aromatic resins on their skin.

They also believe that the colour red signifies “Earth and blood”. Their red skin is one of the things that make them extremely unique. The red colour is from the otjize paste (a combination of butterfat, omuzumba scrub and ochre) and its function is to protect their skin from the harsh desert sun and insect bites.

These same Himba tribe when a family is visited by a guest, the man to show his approval and pleasure of seeing his guest gives the guest the Okujepisa Omukazendu treatment: which is  the wife is given to his guest to spend the night while the husband sleeps in another room. In a case where there is no available room, her husband will sleep outside.”

ALSO READ:  Shanowole : Little boy who went viral for smoking indian hemp and being a terror in his community totally transformed