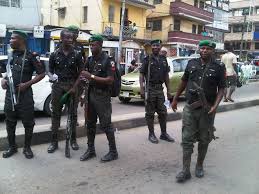 According to reports, one Inspector Ago Egharevba, attached to Obokun Divisional Police Headquarters, hit a young man named Ayomide Taiwo, 20 who is a fashion designer on the head with the butt of his gun.

The weeping mother of Ayomide said that her husband died a few months after Ayomide was born on September 8, 2000. She narrated how she warned her late son not to engage in any quarrel or argument with any police officer.

“Don’t argue with them on the road ooo. Once they ask for money, give them N50,”

The deceased also had a friend with him identified as Wasiu Oladimeji the unfortunate day of the incident. He narrated what exactly transpired, saying:

“The officer was angry that he offered them N50. After hitting Ayomide’s head, we both fell from the motorcycle and blood was rushing out from his head, nose, mouth and ears. I also suffered injury,” Mr Oladimeji said.

“Immediately that occurred, the officers who were not drunk ran away. As the one who carried out the attack was trying to escape, he was apprehended by passersby. We were later asked to rush Ayomide to hospital.” he added.

The family took Ayomide to Ladoke Akintola Teaching Hospital (LAUTECH), Osogbo where he was admitted into the intensive care unit. He spent six days in coma until he eventually passed away on August 9.

The Commissioner of Police in Osun, Undie Adie, had recommended the dismissal of Mr Egharevbe, the officer who attacked Ayomide, to the Inspector-General of Police.

On August 17, a Magistrate Court in Obokun remanded the officer for the killing which the prosecution said is contrary to and punishable under Section 319(1) of the Criminal Code Cap. 34 Vol. Il Laws of Osun State of Nigeria, 2002.

ALSO READ:  Nigeria has less than 500 ventilators for coronavirus patients

The Magistrate, B.O. Awosan, remanded the accused in Ilesa Correctional Centre and adjourned the case till October 19.