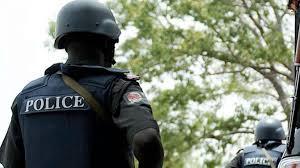 Akinyele Area of Oyo State has witnessed a series of killings in a while, the alledged suspects behind such act is one Sunday Sodipe,19year old.

“I indeed made a promise that criminal elements carrying out dastardly killings in Akinyele Local Government Area of Monica and its environs would be arrested and brought to book.

“Consequent upon this, the Command embarked on an aggressive and sustainable community policing strategy. The cooperation of the affected community leaders, the concerted efforts put up by officers and men of the Command coupled with the unflinching support of the Oyo State Government, and that of the good people of Oyo State eventually paid off.”

However, Sunday when caught with two others confessed at the Oyo State Police Command, Eleyele, Ibadan on Friday that it was one Adedokun Ajani, a herbalist who always sent him on the mission to hack people to death. He said he was taken to Ajani for an apprenticeship.

”I was taken to Baba to learn herbal work. I went to help him buy food and after a while, he sent me away.

“Later, I went back to him to plead and remind him that I had been there earlier but he sent me away because I was too young to learn the work. He later agreed to take me in.

“Before I go out to kill anyone, I go to Baba. He would ask me to kneel down and close my eyes, and he would render some incantations on me.

“Afterwards, he would ask me to open my mouth and he would put something on my lips. He told me that whenever I hacked down my victims and there was blood, I should utter some incantations three times and walk round the dead body three times. He said during that period, a spiritual gene would have intercourse with the victim. He said I should stay there for about five minutes.

ALSO READ:  "They emerged from the bush and ordered me to lie down" a Medical doctor narrates how he was attacked by herdsmen in -Cross River state

He also confessed to killing Barakat Bello, the student of College of Agriculture, Ibadan who was killed recently.

“Yes, I am the one who killed Barakat Bello. I met her bending down and I hacked her with a shovel. When people first rushed out, I was right there in their front but they could not see me.

“I have killed in Akinyele, L-Adisa and also around a church. I have killed in six different places. It is this year that I returned to Baba to beg him to start teaching me herbalist job.”

“Before going to where I would kill, Baba would ask me to kneel down and close my eyes. He would render some incantations, warning me not to open my eyes because I would go blind if I did.

“Baba was the one sending me to kill, but he has never told me what he was doing with the victims. He would only ask me to go and before I came back, he would have bought me food and he would give me N500. But I don’t remove any part of their body. I also don’t rape them.

“I don’t do anything. All I know is that each time I knelt before Baba and he rendered the incantations, wherever I went, I would meet only one person at home. I used shovel to kill my victims.”

However in response to Sunday’s confession, Mr Ajani confessed to Sunday coming to him for apprenticeship by his parents of which he refused him because he was too young but denied sending him to kill any victims.

“His mother brought him to me for treatment. He had learned carpentry work. They said he was not focused or serious. I made them appeasement soap and they took it and left.

“I don’t know anything about all he was doing and all the killings. He only spent six days with me. I had told the parents when they first came that they would do me a paper that they are the ones who brought him to come and learn and that he was too young as at the time they first brought him.

“He was with me for some time and I usually send him food and I and my children would all eat the food. Then six days after he was with me, I sent him to buy us food and when he came back, I just called him and ask him to go away.

“I never taught him any incantation nor put anything on his lips. I only do herbal medicine for rheumatism, stroke, and appeasement. I don’t do money rituals for anyone, because I don’t know about it. I am also into farming. All he was doing I don’t know anything about it.”

ALSO READ:  COVID-19: UK Economy Has Shrank Compared With The First Three Months of The Year