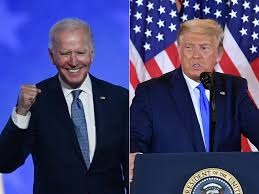 During a brief address on national television, along side his vice presidential candidate Kamala Harris, Joe Biden said he wasn’t yet declaring victory, but that “when the count is finished, we believe we will be the winners.”

Presidential Joe Biden reached 264 electoral votes against 214 so far for Trump. By flip Michigan and Wisconsin and adding the six of Nevada, where he is narrowly ahead, or the larger prizes of hard-fought Georgia or Pennsylvania, Biden would hit the magic number of 270 needed to win the White House.

In stark contrast to Trump’s increasingly heated rhetoric about being cheated, Biden sought to project calm, reaching out to a nation torn by four years of polarizing leadership and traumatized by the Covid-19 pandemic, with new daily infections Wednesday close to hitting 100,000 for the first time.

“I know how deep and hard the opposing views are in our country on so many things,” Biden, 77, said.

“But I also know this as well: to make progress we have to stop treating our opponents as enemies. We are not enemies. What brings us together as Americans is so much stronger than anything that can tear us apart.”

American presidential elections are decided not by the popular vote but by securing a majority in the state-by-state Electoral College, which has 538 members.

US media organizations called Michigan for Biden where he had a lead of some 120,000 votes. Earlier, Biden claimed Wisconsin, with a narrower but insurmountable lead.

The two states, along with Arizona — another that Biden was projected to flip — put the Democrat within arm’s reach of making Trump the first one-term president in 28 years.