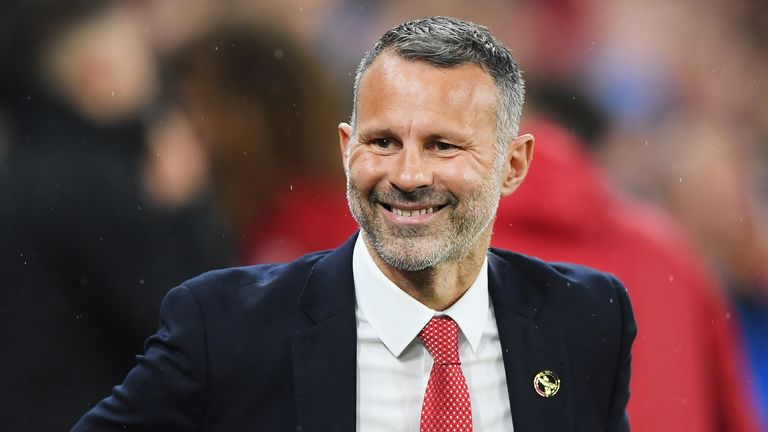 The Welsh FA has announced that Ryan Giggs will stand down as the country’s football manager following his arrest for allegedly attacking his girlfriend, Kate Greville.

Giggs will step aside for the next three matches after the former-Manchester United player was arrested on suspicion of actual bodily harm and assault on Sunday.

The 46-year-old will miss next week’s friendly against the USA and the Nations League fixtures against the Republic of Ireland and Finland that follow.

‘Our agreed immediate priority is preparing the team for the upcoming international matches.

‘Robert Page, with Ryan’s support, will take charge for the next three matches against the USA, Republic of Ireland and Finland supported by Albert Stuivenberg.

‘The Cymru squad for these upcoming matches will be announced on Thursday 5th November. The FAW will not be making any further comment at this current time.’

Police were called to Giggs’s Worsley home shortly after 10pm on Sunday following reports of ‘a disturbance’.

A Greater Manchester Police spokesman told The Sun: ‘Police were called at 10.05pm on Sunday to reports of a disturbance. A woman in her 30s sustained minor injuries but did not require any treatment.

‘A 46-year-old man was arrested on suspicion of section 47 assault and section 39 common assault.’

He was released on bail and was photographed leaving Pendleton police station.

ALSO READ:  A teenager who got 7A1s in the 2019 West African Senior School Certificate Examination (WASSCE) has died.

Gigg’s agent announced last night: ‘He denies all allegations of assault made against him.

‘He is cooperating with the police and will continue to assist them with their ongoing investigations.’

Giggs and Ms. Greville, who both first met in 2013, have been on-and- since 2017. They were linked after she ended her marriage in 2015, 18 months after she started working for him as head of PR for GG Hospitality, his firm owned by Neville.