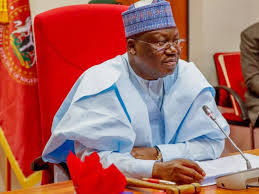 The Senate Committee has resolved to uphold the result of the Auditor-General On Alleged Misappropriation Of N559m By Ministry Of Health.

The report submitted to the Chairman Senate Committee on Public Accounts, Senator Mathew Urhoghide revealed that the Ministry failed to remit the statutory 25 per cent of the amount totalling N139,768,750.00.

According to the report: “It was observed from the data gathered from the State Centres of the Port Health Services Unit of the Ministry that a total sum of N559 million was generated from the sales of 681,427 units of International Certificate of Vaccination (Yellow Cards) to the public between August 2013 and March 2015.

However, the Ministry failed to remit the statutory 25 per cent of the amount totalling N139,768,750.00 to the Consolidated Revenue Account.”

In the same vein, the report also discovered that nine assorted vehicles belonging to the Ministry were taken away by some former officials of ministry when they left its service.

“A vehicle survey conducted by my officers revealed that 9 assorted motor vehicles belonging to the Federal Ministry of Health were taken away by some former officials of the Ministry when they left the service of the Ministry.

In a separate query, level 12 officer was paid N74 million against the laid down procedure in the civil service.

The query reads, ” A whopping sum of N74.6 million was paid to a Grade Level 12 officer in the Ministry on 21st July 2014, as a personal advance for the Public Awareness Campaign for International Travellers on diseases of International Public Health importance.

“It is worrisome that such a huge amount of public funds could be entrusted to a Grade Level 12 officer, whose entire terminal service benefits cannot even match the size of the liability.

“An attempt by the officer to retire the advance in January 2015 was queried by the Internal Auditor for lacking sufficient details of the disbursement of the money. Up to the time of writing this report in September 2016, this huge advance had not been properly retired.”