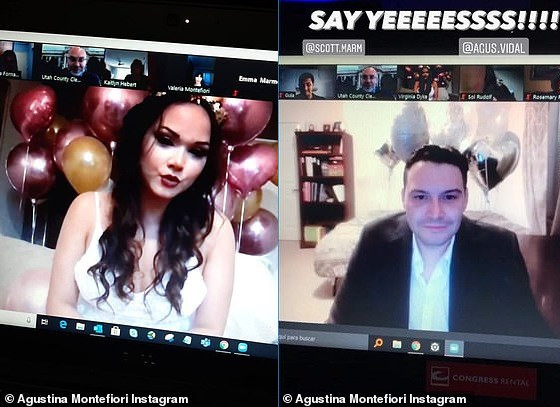 In January, Scott proposed marriage to Augustina when he went to visit her before going back to the States. He had been planning to move to Argentina again in March before borders were shut to enforce lockdown.

According to Mail Online, the pair got married last week via video call in a 19-hour ceremony. They were granted a marriage license to the wedding online by the state of Utah, before tying the knot 6,000 miles apart in front of a judge in Utah, and their family and friends.

Augustina  said: ‘A family friend of Scott introduced us, they organized a dinner and that’s how we met.’

She added: ‘One day, in a very American style, he took out the rings, knelt down and proposed to me.’

Scott said: ‘I had a flight date for March 22, but on March 14 all borders were closed due to the pandemic and then we were separated.’

He said he tried to get permission to fly out but was refused because they weren’t a married couple and related.

Augustina added: ‘They never understood that my boyfriend came to marry and live in this country, that he was not traveling as a tourist

‘Before every question, the answers were always negative and they told us that if we were not married, Scott could not enter the country.’

He is now able to apply for a family reunification visa – costing £650 – and then they can then be reunited.