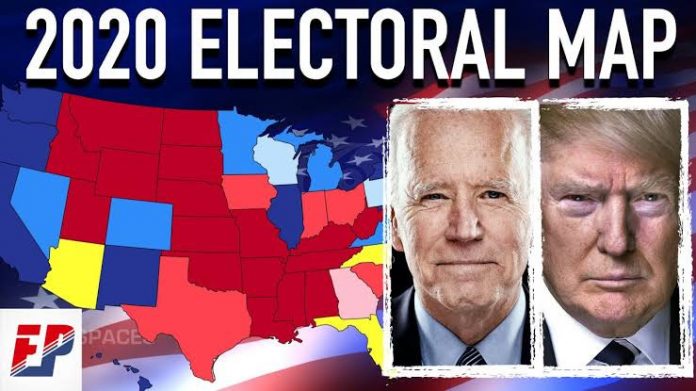 US president, Donald Trump and Democratic challenger, Joe Biden are in a tightly contested battle for the White House as Americans choose who will lead them for the next four years.

In the American electoral system, some states carry more electoral points than others, and that is why some states results are given more significance in a US presidential election than some others.

Those states are referred to as key battle ground states, and a candidate’s success in them could as well grant him victory in the presidential race.

As of press time, Trump trails Biden by 213 to 238, but all that could change as the vote counts get collated.

Trump has a major lead in states like Georgia, Pennsylvania, North Carolina and Michigan with those states having 16, 20, 15, and 16 electoral votes respectively.

Biden who already has 238 electoral votes, has a lead in Nevada, Wisconsin and New Hampshire.

ALSO READ:  US Presidential election: One person has been arrested over a planned attack on Pennysylvania Convention Centre in Philadelphia where votes are counted

Biden will have to gather more votes in states like North Carolina, Pennsylvania and Michigan to get as much as 270 electoral votes.

Trump has already won battleground states Florida, Ohio, Texas and Iowa while Biden has won New Hampshire and Arizona and is favorite to win Wisconsin.

This could explains Trump’s decision to threaten going to the Supreme Court as states controlled by Democrats like Pennsylvania could delay vote counting for days in order to get count more absentee ballot votes for Biden.

As it stands now the electoral results still hinge on a lot of factors but LIB will keep giving you updates as the results keep pouring in.