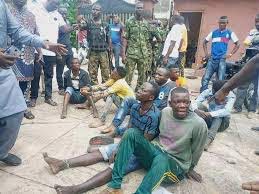 Recall that Senator Teslim Folarin’s home in Oluyole area of Ibadan, Oyo state’s capital was invaded and about 300 motorcycles were carted away.

However, some suspects have been arrested in connection to the invasion.

According to Sen Teslim’s brother, Yinka Folarin, the suspects were arrested at the residence of the lawmaker by the Oyo State joint security task force ‘Operation Burst’