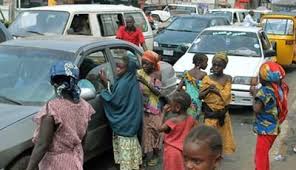 In the Chisco Area of Lekki, Lagos State, a woman identified as Mama Ajayi has been arrested by the Lagos State Police Command for allegedly using children to beg for alms.

“The fact of the case is that the petitioner stated that the suspect is in the habit of using children as beggars in the streets and that effort to stop her from doing that proved abortive even after she was offered rehabilitation and empowerment by Auntlander’s Bethel Foundation.

“The complainant stated further that three children were earlier rescued from the suspect in December 2020 and on 12th March 2021, the suspect was again seen on the street begging with another child. The suspect will soon be charged to court”,

ALSO READ:  Lagos State Police Command Says That It Will Require N10b To Replace Facilities Lost To The Destruction By Hoodlums