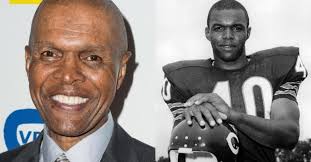 Gale Eugene Sayers was an American professional football player who was both a halfback and return specialist in the National Football League.

Roger Goodell, the NFL Commissioner in a statemnent on Wednesday said:

“The NFL family lost a true friend today with the passing of Gale Sayers. Gale was one of the finest men in NFL history and one of the game’s most exciting players,” said NFL

“Gale was an electrifying and elusive runner who thrilled fans every time he touched the ball,” added Goodell, noting that “we will also forever remember Gale for his inspiration and kindness.”

He was diagnosed in 2012 with dementia, according to his wife, Ardythe, who confirmed Sayers’ illness in 2017.