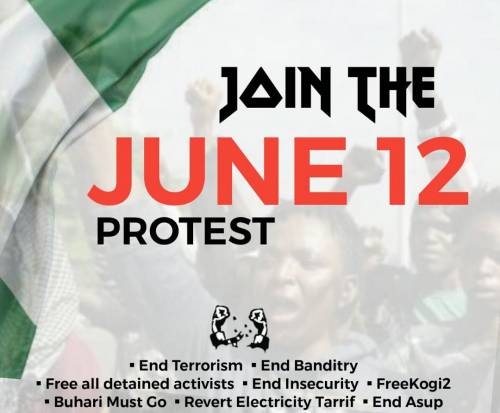 Team Lagos has encouraged Lagos residents to shun the protest scheduled on Saturday, June 12 in Ojota.

TEAM LAGOS, according to a statement signed by the team’s Director General, Zulu Authority, would resist any protest by any group of people across the state.

The group’s stated goal is to promote peaceful cohabitation as well as the safety of people and property.

They warned against any protests in Lagos, emphasizing that the #EndSARS experience will not be repeated.

The EndSARS protest was hijacked by thugs allegedly sponsored by the government, resulting in shop looting and property destruction.

“We are progressives and well-meaning youths and foot soldiers of All Progressives Congress (APC). Our primary objective amongst others is to promote peaceful coexistence and security of lives and properties, inrrespective of tribe, culture or party affiliation.

“The people Lagos state have suffered a lot during the #EndSARS protest. We can not fold our hands and allow any form of protest in the state that will be hijacked by unguided and scrupulous miscreants, especially when the country is facing security challenges. We will not allow any form of hardship on the good people of Lagos state.

“Team Lagos will resist any protest from any group or people across the state. Take your protest somewhere else and not Lagos state. Our Lagos must be great and secure,” the group said.

Civil society organizations and human rights campaigners had called for a nationwide protests against the Muhammadu Buhari-led administration on June 12, Nigeria’s Democracy Day.