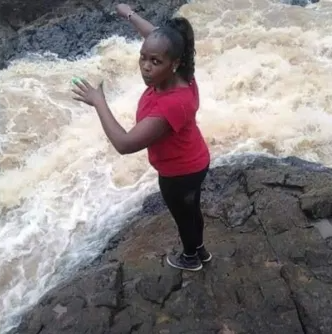 Dorcas Jepkemoi Chumba, 31 is reported to have drowned when she fell into a dam at Chepkiit Waterfalls in Nandi County, Kenya, on Sunday, August 30.

The incident occurred when her fiance, Benjamin Kazungu was taking pictures of her with her phone before she slipped and fell into the dam.

Her fiance stated that they were out on a date as both of them had always planned to visit the dam because ofthe waterfall. He said little did he know that would be his last time seeing her.

He narrated how wonderful it was watching her pose with excitement for the pictures before she accidentally slipped into the flooded dam, disappearing into the waters as he tried unsuccessfully to save her.

“I encountered the worst scene of my life. Seeing her sinking helplessly into the water and my effort proving futile breaks my heart even more,”