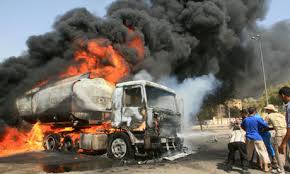 On Thursday, at about 6:20 am at Candos Road, Baruwa area of Ipaja, Lagos, an LPG (Liquefied Petrol Gas or cooking gas) tanker, was discharging at the Best Roof Plant Station when it exploded.

According to reports, no fewer than five persons were killed and eight others with varying degree of injuries, and the explosion was traced to the station’s power generator, which was supplying power while the tanker was discharging products into the storage tank.

Preliminary assessment of the explosion put the damages at 89 shops, 44 buildings, including a church, school and event centre, 23 electric poles, two transformers, gas tankers, one tricycle and one motorcycle.

Confirming the incident, Mr. Ibrahim Farinloye, the South-west Zonal Coordinator for the National Emergency Management Agency (NEMA), stated that the explosion was on a large scale because the Best Roof Gas Plant Station was located in a densely populated community.

“The eight casualties with major burns are currently being treated at the Gbagada General Hospital Burns Unit, while the five bodies recovered have been deposited at the mortuary.”

Farinloye debunked the reports making rounds that eight people have been confirmed dead in the explosion, saying: “Even the police chief and others were there with us. We found five bodies only. The others are still alive and being treated.”

Also speaking on the incident, Mr. Babajide Sanwo-Olu, Governor of Lagos State has expressed deep sorrow on the tragedy and described the incident as a sad memory in the life of his administration, blamed negligence on the part of the gas plant operators for the explosion.

“The gas explosion this morning has left a sour taste in my mouth. It is a reminder of the dark episode of March this year at Abule Ado Soba when innocent lives were lost to gas explosions of monumental proportion and properties destroyed. I really can’t believe that we would witness another such incident, no matter how little.

“I wish to, therefore, register my heartfelt condolences to the families of those that lost their loved ones in the fire. I pray that God grant their souls eternal rest.”