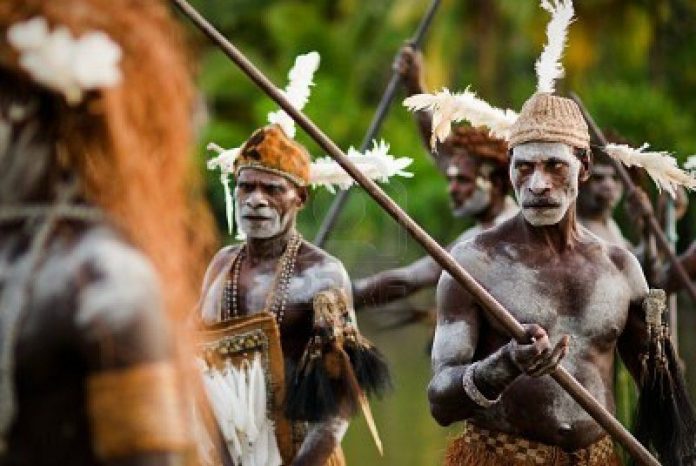 The Asmat are an ethnic group of New Guinea, residing in the Papua province of Indonesia. The Asmat inhabit a region on the island’s southwestern coast bordering the Arafura Sea.

As of 2004, The total Asmat population is estimated to be around 70,000. This tribe is the most Cannibalistic tribe in the world and just mentioning the name drives huge fear.

The Asmat dwellings are typically been built two or more meters above the ground, raised on wooden posts due to the frequent flooding that occurs in the region.

They are the most famous cannibalistic tribe on Papua, a province of Indonesia.

The Asmat tribe believe that they arose out of wood. Therefore, wood is sacred for them. Even in ancient times they carved wonderful things from wood hence they are considered to be the best woodcarvers of the stone-age and many of their engraved carvings are in museums around the world.

This people are well known for their head hunting and cannibalism. They do not only hunt for skulls, they worshipped them also. The skulls of the deceased were stripped of the brain and the eyes and nasal parts were closed up in order to prevent evil spirits to enter or exit the body.

The human head is very precious to them such that during burials, they cut it off and the head is used as a pillow.They also believe that anyone who died in his prime age was killed by an unnatural causes hence the need for revenge. To fulfil the ancestors’ demand for justice, they often drew a ritual calendar for headhunting and revenge missions.

They would put human skulls under their heads instead of a pillow. They would eat brains of their animals mixed with sago worms straight from their halved skulls.