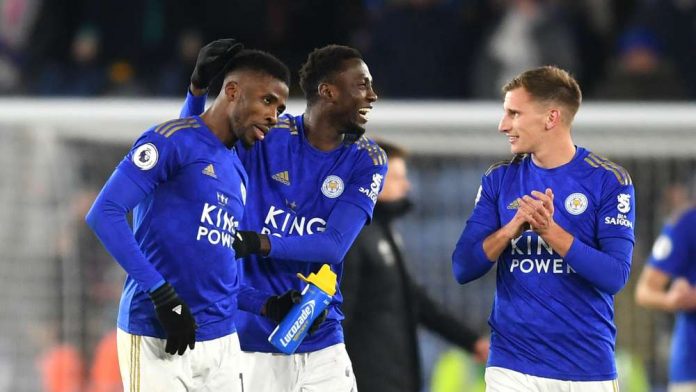 Kelechi Iheanacho and Wilfred Ndidi featured as Leicester City secured a 2-0 victory over AEK Athens to secure a place in the knockout stages of the Europa League on Thursday night.

Iheanacho was afforded his sixth appearance in the European competition and spearheaded the Foxes attack.

The Super Eagles center-forward gave a good account of himself in the encounter, although he could not add to his three goals in the tournament.

Nddi made his fifth appearance across all competitions for Brendan Rodgers’ men this season and helped them keep a clean sheet.

The 23-year-old midfielder only recently returned from a groin injury which kept him out of action since September.

Ndidi started in the midfield for Leicester along with Dennis Praet, Youri Tielemans, Cengiz Under and Harvey Barnes.

Cengiz Under put the Foxes in front as early as the 12th minute of the encounter, firing home a fine volley.

Barnes doubled the King Power Stadium outfit’s lead in the 25th minute which proved vital as it sealed the Foxes’ victory.

The second half continued in a similar fashion, with Leicester dominating proceedings but could not add to their lead.

The victory sealed the Premier League side’s place in the next round of the tournament after finishing top of Group G with 13 points from six games.

Ndidi featured for 63 minutes before he was replaced by Nampalys Mendy and made one tackle and three interceptions during the 61 times he had an opportunity to touch the ball.

Iheanacho, meanwhile, had 28 touches on the ball, struck one shot, made one key pass before making way for Ayoze Perez in the 67th minute.

The center-forward has now featured in 12 games across all competitions for Leicester City this season, scoring three goals and providing three assists.