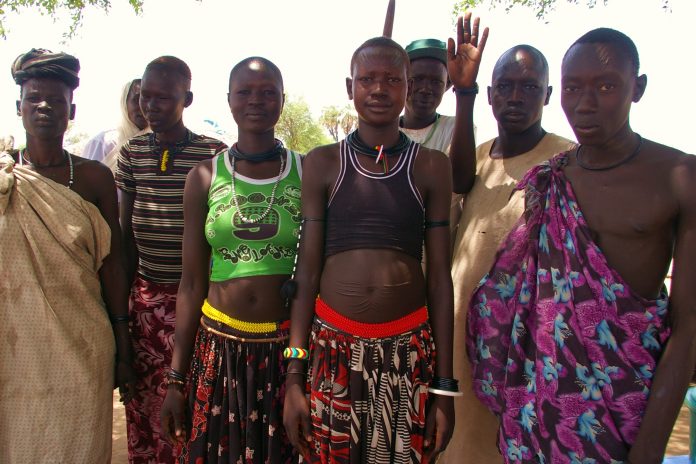 The Mundari are a small ethnic group of South Sudan and part of the Karo people one of the Nilotic peoples.

Mundari tribal lands are located roughly 75 kilometers north of Juba, the capital of South Sudan, and are centered on the town of  Terekeka in the state of Central Equatoria.

Unlike other tribes where a man who is interested in marrying a woman goes with his family to the lady’s house to ask her hand in marraiage, the Mundari tribe is completely different.

After the Lady and her man would have agreed to be together, she approaches his house and moves in with him as wife only then are her parents called to inform them , of which they now decide what how many cattle would be given as dowry.

According to sources, if a man informs the girls parents about his intentions to marry their daughter, he could get beaten up.

In this same tribe, cow urine is a necessity and very important as they residents bathe, wash their faces and decorate their hair with it.

According to them, the urine serves as a dye that changes their hair colour, something that their women admire so much and it makes them fall in love with their men who carry such hair.